The King of Pop 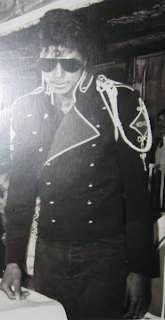 I too mourn the death of Michael Jackson. My secret I will reveal to you and the world. When I feel like dancing I put my headphones on and "Don't stop 'til you get enough". If he would have stopped with his plastic surgery in 1982 right after "Thriller" or possibly after "Bad" 1986 he would still be alive today. I had one personal interaction with him in 1982.
I heard that he was coming to town. So I walked out of my S.F. apartment on Post Street and headed down to Geary, the Clift Hotel. My F4 Nikon in my hands, 35 mm lens, Ilford HP4 black & white film pushed to 1600 ASA. As I crossed the street a huge black limo landed in front and Michael Jackson got out. I was the only person standing on the sidewalk. Star-struck I lifted my camera to take his picture and that instant he threw his fur sable coat over his whole body and ran into the foyer of the hotel and elevator. I took an image of him with a coat over his head.
Here is a picture of him which I took in the De Young Museum a while back. Enjoy!
Posted by Martina Konietzny M.F.A. at 11:36 PM No comments:

Labels: Unknown photographer at the De Young of Michael and the Jackson Five 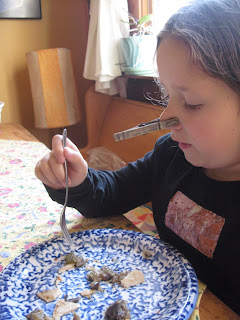 All you mothers and fathers out there have had the occasional run-ins with certain foods their children just won't eat or even try. Our daughter already at age four and a half had figured out that if she did not like a certain food such as i.e. "spinach", she simply, in her Northern California way would say:" No, thank you, I am allergic to spinach and kale."
Yesterday, this little whippersnapper turned eight and a half and food is often still a discussion. She came home a few days ago and told us that she had learned in school that people who have no sense of smell have a decreased sense of taste.
Equipped with this new knowledge and just finishing second grade she eats her food now. Yes-with a wooden clothespin stuck to her nose.
Clothes Pins:
Invented by David M. Smith of Springfield,Vermont in 1853. I encourage all of you to get clothes lines and pins. You can reduce the washing powder by half and use no bleach. I promise having your clothes hang out in the sun is a natural bleacher and refresher let alone the electricity bills will be a delight to savour. Believe me the fish out in the reefs will thank you.
Posted by Martina Konietzny M.F.A. at 5:08 PM No comments:

Claymation by DylanGrace and Coralie Border

Last week we received a phone call by our lovely friend Laurey and were asked if we could watch her daughter Coral on Friday while her and her husband Geefwee attend a fabulous party at Pixar. Well, I rather would have liked to go along to the party yet then remembered I had an evening planned with Andrea to go see "Revenge" at the Landmark Theatre in Berkeley. So my beloved husband spent the evening with two 8 and 9 year olds and they decided to make a movie out of clay figures. When we all got home we were floored what they had achieved. Please see for yourself.
Posted by Martina Konietzny M.F.A. at 8:30 PM 2 comments: 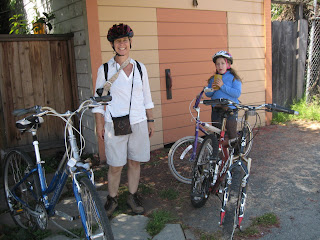 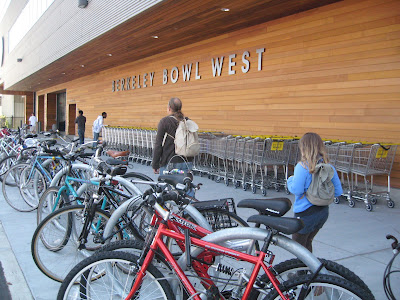 Everyone out there knows that I sing praises when it comes to the Berkeley Bowl but hardly anybody has it in them to actually go there and shop. My very own husband usually would loose it in the vegetable and fruit isles and come home with neither fish nor milk since it would have mend to walk more of those overcrowded aisles.
Well, our property value probably took a seismic jump this last Thursday when the
doors to the new 'Berkeley Bowl West' opened on Ashby and Heinz across the street from the Ecole Bilingue de Berkeley.
We all went to check it out on our bicycles with backpacks on our backs. The store is a hybrid between a Whole Foods and a  Cosco and I am in absolute heaven to have it that close.
Now between my garden's bountiful harvest and the new Bowl I have it made in the shade and every day when it comes to shopping and cooking is a day at the beach.
Posted by Martina Konietzny M.F.A. at 7:56 PM No comments: 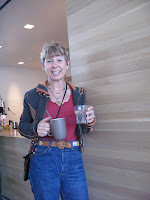 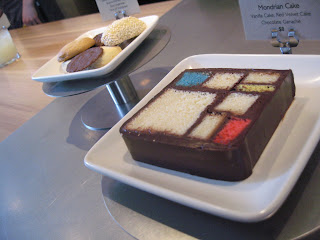 Go check out the new Rooftop Gardens at the MOMA. Flush a Mondrian Vanilla, Red Velvet Cake Chocolate Ganache down with a cup of  Blue Bottle coffee.
Andy Warhol, currently at De Young Museum, liked the mother of Liza Minelli? I did not know who she was?
Squeak Carnwath at the Oakland Museum go and find out why she paints a rabbit into most of her paintings and which mediums she uses for her collage style work.
Posted by Martina Konietzny M.F.A. at 6:49 PM No comments: 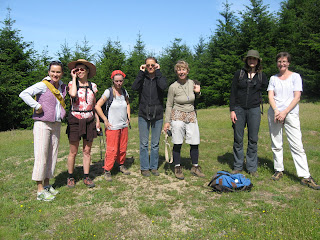 Dear Sarah,
I could have walked for days longer.
Thanks for organizing the day and being the trailblazer you are.
Highlight was the the eastern warbler, the snake and the coffee break at Pt. Reyes Station.
Posted by Martina Konietzny M.F.A. at 11:11 PM No comments: 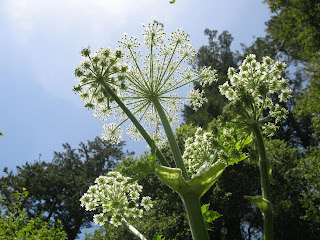 I came home after a long day of hiking to a rose-petaled path which led me to a table of flowers, photographs, notes and homemade gifts - and dinner.
Mothers please tell me your favorite Mother's Day remembrance and a complimentary portrait might be heading your way.  Write an e-mail to receive contest entry forms.
Posted by Martina Konietzny M.F.A. at 10:44 PM No comments: