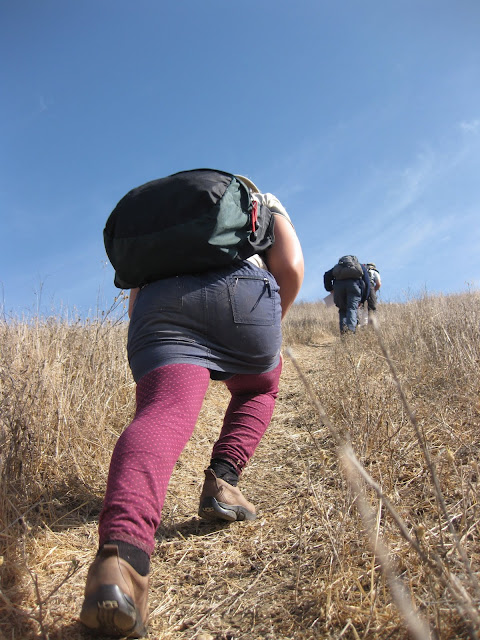 By default my daughter eight years old and I strolled the Solano Stroll and stumbled upon Mr. Steve Tabor's booth and his Desert Survivors. A short glance at the schedule for the Autumn of 2009 convinced me that we needed to join immediately. Any organization who will go in after Burning Man's big bash to the Black Rock Desert to work on preservation and up-grading was an organization I could put my name down for full-heartedly.

We had a great time Saturday. We hiked 5 miles with the Desert Survivors through Briones State Park. I had never been there. The park itself takes getting used too and we did find a few very scenic look-outs and some unexpected wildlife such as of now unidentified snake which had attack maneuvers like a rattler and made moves as being mesmerized by a snake-charmer. It was an amazing trip and learning experience. The steepest we hiked was at 30% and I realized that I will have to resole my 20 year old hiking-boots which I almost use daily once we get ready for a real trek with them.

I met amazing people i.e. a man from Sweden his name was David Jorgens, a retired mathematician who travels the world to teach mathematics. He was recently in Tanzania and between seminars hiked up Mt. Kilimanjaro. His group were Italian gymnasts who all wanted to run up the mountain.

Well, guess what happened? Who was the only one who made it? Of course Mr. Jorgens. He is in his seventies. The Gymnasts ran up the mountain and after the fourth day were laying by the side of the path with acute mountain sickness. Their leaders made them go back and Mr. Jorgens was the only one who got to reach the summit. What a great example of the tortoise and the hare.

The morning was dedicated to the compass and that triangulation is key for that maneuvering tool. We used U.S. Geological Survey, Topographic maps. Scales and miles - versus kilometers and squares. Learned that we need to think about declamation=which means that the magnetic North declines about 15 1/2 feet north on every map.So the magnetic north is not the same as the true north. The map colors: Green is vegetation, blue is water and white are valleys. Lines signal the level; the closer they are together the steeper the hill. Elevation lines go up as an app-ex and a drainage ditches are angling from high to low.

Meanwhile western bluebirds, possibly young residents, not migrators, were surrounding us and playing with one another. Most lovely.

The afternoon we learned about global positioning and that there are 12 satellites in orbit. They were put there in the sixties and were used for air-bombings in Vietnam. They are geo-synchronous and move the same as the earth. They communicate with each other and us down here. It is an electronic signal instead of a compass-line. At that point DylanGrace asked "How do people know that the earth moves?" One of the participants simple said: " That is a different seminar!"

Hope to see you November 20 in the North Mesquite Wilderness.

Labels: Snake to be identified