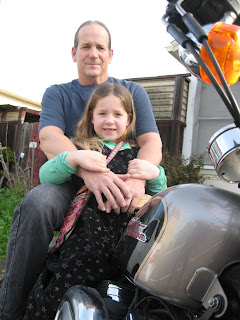 First day of lent I was sitting in the presents of an "enlightened being" who came into to the studio to look at my work. We had a fantastic rapport with one another and I am so delighted that at the end of the meeting, she actually agreed for me to take her portrait. We will spent a day together in Marin early next month. She is a famous author from Germany and I am excited to start reading her books next.
After she left I was able to clean my refrigerator with joy and calm while a pear-tart with marzipan and cardamom was baking in the oven for my family. So much for the first day of lent.
Posted by Martina Konietzny M.F.A. at 3:07 PM No comments:

ANTONY AT THE MASONIC 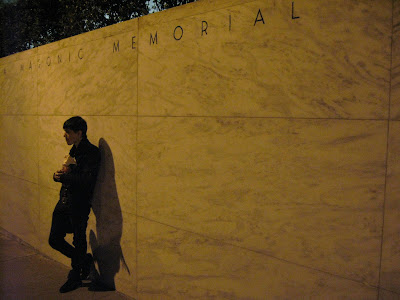 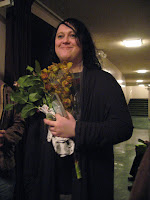 Masonic Auditorium was packed last night with aging "grunchers", punks with pink stiff haired mohawks on I-phones, grandma's and tattoos, young hipster Aphrodite's', goddess of love, beauty and sexual rapture coupled with multiple complex personalities. The straight guy or girl was completely underrepresented. We all rocked internally listening to "Cripple and the Starfish", "Shake that Dog" "River of Sorrow" etc.
Posted by Martina Konietzny M.F.A. at 12:42 PM No comments: 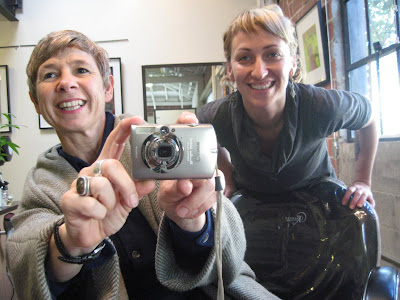 ANGELA OF REMEDY
Thank you Angela www.remedysalon.com   for yet another great haircut.
Will you believe that I was able to get a complimentary ticket last night to see Antony and the Johnsons and a backstage pass. The concert was ethereal with haunting beauty. An ecclectic mix of pop and classical. The clarinet player worked himself into my bone-marrow and Antony will haunt me forever. A must see in concert.
Posted by Martina Konietzny M.F.A. at 11:11 AM No comments: 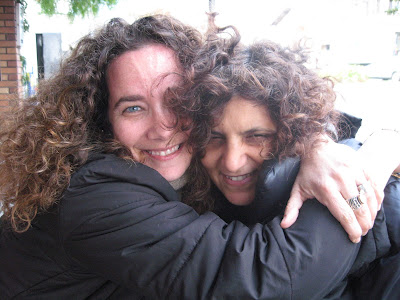 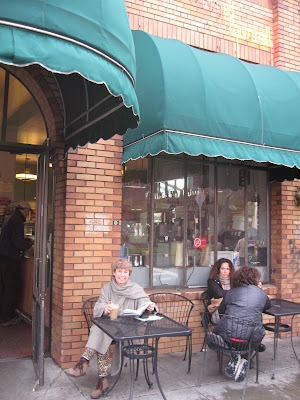 The French Hotel
While my daughter had her piano lesson with Pia, I enjoyed my book "Three Among Wolves" and a latte at the French Hotel. Here I met these two lively Israelis, Natalie and Liora. Please send your e-mails if you read this. I had another idea how to solve the Palestinian and Israeli conflict. By the way French Hotel you need to invest in some light-bulbs.
Posted by Martina Konietzny M.F.A. at 11:21 PM 3 comments: 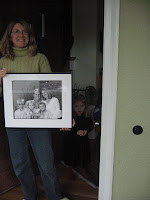 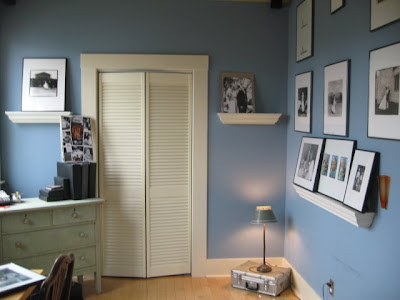 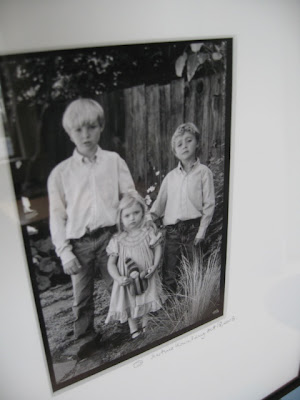 Today Lisa & John finally received all their framed "Works of Art". Their family appears to me one to look up to. Three gorgeous well-behaved children in a Waldorf inspired  home environment.
They were able to win (purchase) my portrait session through the Silent Auction (The Salon) of the East Bay Waldorf School.
Here a view into my studio with their photos placed on the mantel, ready for personal delivery.
I thank you Lisa and John for your order of my work and the many memories they will embody throughout time.
Posted by Martina Konietzny M.F.A. at 7:43 PM No comments: 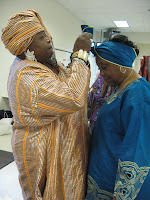 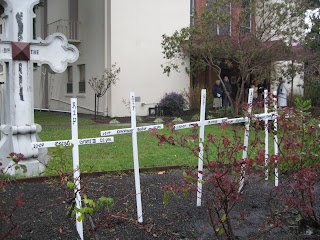 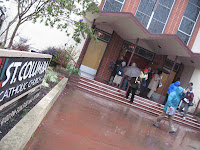 ST.COLUMBA CHURCH....my favorite church in the whole wide world. Only five minutes away by foot from my house. I have in my latter years proclaimed that I am a church-going atheist always battling between Dawkins and the Divine.
This church and it's parishioner's are of a very special nature. Actively involved in " i.e. closing the "School of the Americas", candlelight vigils for our Victims of Violence and the out reach and help for our challenges with prostitution. We are the church who gives the violence in Oakland a name and a face.
We place white crosses for everyone who lost their lives through homicide. In 2008 by this date today we already had 23 crosses. As you see in my photo from today there are six crosses. Our community mourns everyone of them. Hopefully the drop in numbers will be steadfast throughout the year.
Posted by Martina Konietzny M.F.A. at 9:41 PM No comments: 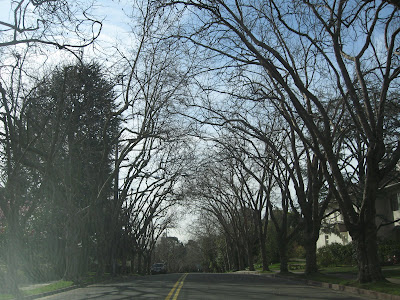 OWL HILL COURT
Surprise night spent in a friends' brand-new house.
Hickory wood floors.
Rooms, expanding into the night-skies.  Sauna, Gobi desert hot.
Meditating into the wee-hours.
Dreamless slumber.
Waking to the sound of finches, morning doves and a cacophony of frogs.
Silently stepping into the black-blue dawn.
Thank you Susie and Bill
Posted by Martina Konietzny M.F.A. at 10:47 AM No comments: 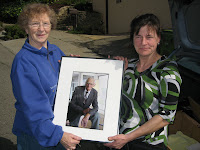 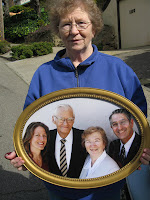 Dear Baerbel,
here from Martina Konietzny Photography we want to express our deepest sympathy for your loss. Amandus  was "The Rock of The Family" when he passed on January 22, 09. We are all so proud of his courage. He travelled twice to Germany to see his whole family and celebrated his 72nd birthday just recently with all of you.
We wish you for the 3rd of April well when you will celebrate your 44th wedding anniversary in spirit. His gardening expertise was so inspiring to me that now my daughter and I have a small garden too. One day I will visit  Seebuell again and stay in your family run Hotel Deichgraf in Stedesand. I am happy that you went to see the Emil Nolde Museum, a trip I made many years ago.
Thank you for hiring me to take your family portrait. I wish I would have one like yours of my family before my father passed last September.
Posted by Martina Konietzny M.F.A. at 5:37 PM No comments: 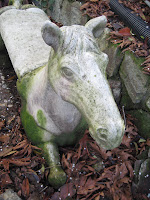 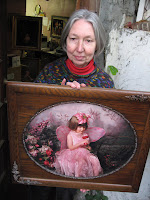 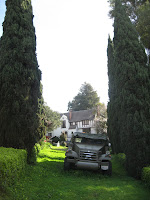 Meet West Coast Printing Art ...
today I had to bring some work of a client to Ellison & Nancy of West Coast Printing Art.
You can find them, if you can find them, in the gorgeous hills of Piedmont, CA. Their house is a mansion covered with collectors cars (son Anthony is responsible), old statues, cypress trees and a U-shaped drive way.
They do all the printing for "Das Buch" which is published by U.G.A.S.
They have lived there for 40 years. Give Nancy a call 510 465-3699. By chance I knew them from the Professional Photographers of the Greater Bay Area for their whimsical portrait work.
Posted by Martina Konietzny M.F.A. at 5:12 PM No comments: 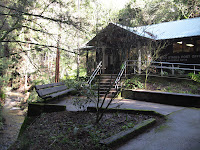 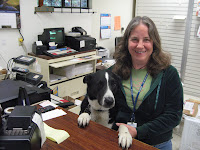 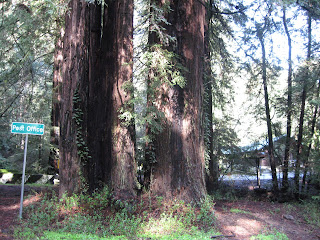 Canyon's second best kept secret...
If you ever need a passport or want to do your holiday mailings fast, go visit Elena Tyrell and Carla Williams at the Canyon post office. Here they never run out of your favorite stamps and have more designs to choose from than any other post-office I ever visited. That includes the one up north inside the "Avenue of the Giants" by Benbow, California.
You will find Elena, Carla and their sugary treats in the middle of a Redwood forrest between Montclair and Moraga. Far away so close to the hustle and bustle of Oakland and surroundings.
It is a fantastic biker's route if you feel so inclined.
The post office was built along with a convenient store by loggers in 1922 and originally was called Sequoia. The biggest tragedy happened in 1969 when Shell employees were on strike and dynamited a pipeline. The oil ran down the creek and killed all fish, including spawning salmon for the next two years. It ignited the fire in the wood stove and burnt everything down to the ground. A Shell employee passed later with severe burns while on the pay-phone to his superiors. Several other people were badly hurt.
Shell later put up a $ 1000 reward to find the person responsible for the blast. The reward has yet to be redeemed.
Posted by Martina Konietzny M.F.A. at 6:16 PM No comments: 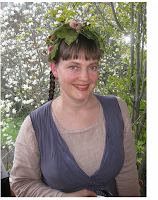 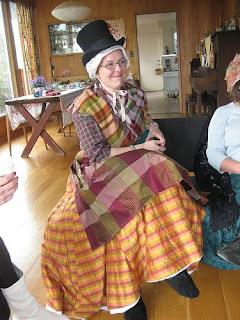 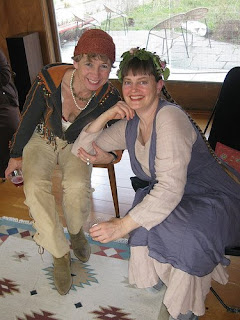 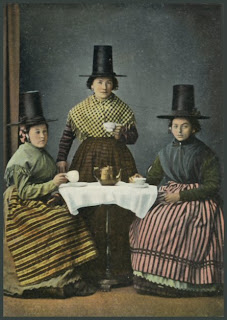 Dear Laurey,
thank you for a wonderful birthday party.
The hats were to die for.
Great to see you: Bena, Vickie, Karen, Karima and Andrea
Warmly, Martina
Posted by Martina Konietzny M.F.A. at 9:20 PM No comments: 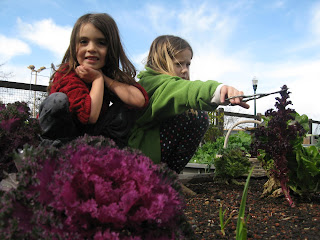 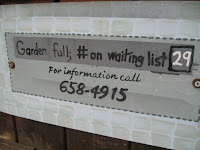 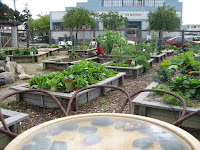 February 13, 2009
Dear Mr. Stewart, Mr Plouffe and The Honorable President Barack Obama,
please let me know if there is a better address to send my ideas and dreams for our great country.
I am originally from Germany yet now I am a  proud American as well as German. I decided to become an American Citizen when Mr. Obama started running for the Presidency. No other election since 1977 has given me this jolt.
So here are the important seeds I would like to sow into our fresh earth.
1) WATER: Every household shall be required to capture our most precious resource, WATER.
2) GRAY WATER SYSTEMS: Every household should have its own so we can at least flush our toilets with rainwater. The government can supply kits of re-used materials.
3) SOLAR COLLE CTORS: Hopefully they will go soon back onto the White House and be distributed to all households with installation.
4) COMPOSTING HUMAN WASTE: We shall navigate toward COMPOSTING OUR WASTE. There is no good reason anymore to mix our waste with our precious water source.
5) WATER-PIPELINES:We shall build pipelines which could carry millions of gallons of water from our states which suffer floods to the once suffering draughts.
6) Every BRACKEN PIECE OF LAND shall become a Community Organic Garden, while the owners of that piece of land is waiting for higher returns.
7)   Schools shall all have their own gardens. Most older schools have kitchens they shall be used which could employ cooks and sous-chefs.
8) Our CORRECTIONAL INSTITUTIONS shall be self-sufficient again. Prisoners shall cook, clean and plant gardens. Meaningful activity to off-set aggression and depression.
9) Our MILITARY shall be self-reliant. No more outsiders providing anything. Off-set boredom.
10) All Governmental Institutions shall use porcelain versus Styrofoam. Also AMTRAk shall go back to that as well as the chef they used to employ. We need to start thinking to create less waste.
11) All electronic stores i.E. Computer, cellphones need to take the old appliances back as well as establish repair-shops for large and small appliances. If you create you need to dispose, simple.
We also need Michael Pollan www.michaelpollan.com/omnivore in our new government. He is a "think-tank" of human-being and a U.C, Berkeley professor. He needs to re-do our "Farm-Bill", it will roll around again in five years. He personally encouraged me a few years ago to plant a garden. I had been for 8 years already on the waiting-list for the Emeryville Community   Garden. I received a garden just in time for the Inauguration Day and I planted my first seeds as Mr and Mrs. Obama walked down Pennsylvania Avenue.
Myself and lots of friends worked very hard to get Mr. Obama elected we would be delighted if he gets to hear these ideas.
Very truly yours,
Martina Konietzny
P.S. Also we could put lots of people to work by getting all our telephone-lines underground.
Posted by Martina Konietzny M.F.A. at 8:08 PM No comments: 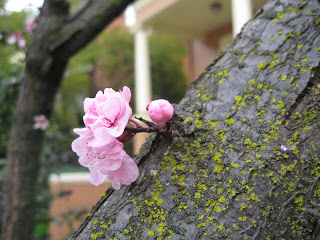 Letter to the White House

Posted by Martina Konietzny M.F.A. at 6:32 PM No comments:

Dear Friends,
A White House Luncheon  recently  mentioned  my "Ideas for the Country". Some of you have received that post 2/13/2009.  I apologize for sending everything in a "cc" versus a "bcc". I had my web master help me to get my "bcc" back on line.
Sincerely,
Martina Konietzny
Posted by Martina Konietzny M.F.A. at 11:35 AM No comments: 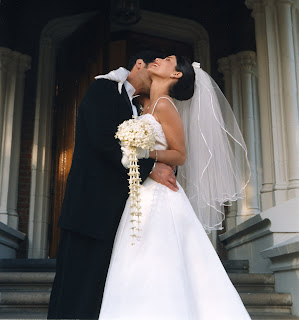 Welcome to be part of my "New Life" which is being created.
I love you all
Martina
This image of Kristina and Jim was created at the Kohl Mansion with  my Rolliflex in 1997. If I look at it know and think back about the evolvement of technology I am in absolute AWE.
Posted by Martina Konietzny M.F.A. at 10:14 AM No comments: