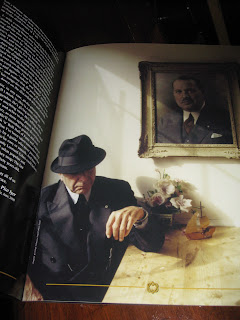 Dear Followers,
I know everyone is dying to find out how on earth I could be purchasing a ticket for Green Way; if needing a ticket for Leonard Cohen? Well, on April 14, I took my car to downtown Oakland.  I parked what seemed out of range for the Paramount Theatre; and in fact from where I was; I had lost all my bearings. So I wondered toward crowds of people cuing around a luxury theatre.
I had my sign "Need free ticket" in my hand (people chuckled as they read it). After a few minutes a young man told me that his girlfriend had not shown. He would be glad to sell hers to me for $ 20. We waited in line chatting and laughing.
At one point I said somewhat out loud; how funny it was that the theatre was already announcing next weeks shows and that there was no mentioning of the Paramount and Leonard Cohen.
"No", he said, "we are not going to see Leonard Cohen. We are going to see Green Way. This was the Fox Theatre not the Paramount and Green Way was playing at the Fox.  The Paramount with Leonard Cohen is a couple of blocks up". I was dumbfounded.
Later I found out Green Way never plays in such intimate theaters as the Fox. I could have gone to see Leonard Cohen the next day.
What struck me the most is how a city, dilapidated with the highest crime in the U.S., could have two huge sold out shows in two brilliantly refurbished theaters looking like twins simultaneously as far as the eye could see with all caucasian  people!
Sometimes life is just unbelievable.
Posted by Martina Konietzny M.F.A. at 2:41 PM