The radiant light seems to be poisonous. Cancer in the ones around you can cause bad-tempered conceptions. Fondly I think of having the Dharma work from the inside out.

When DylanGrace woke up the other day she was obsessed with putting on her friendship necklace. She was fumbling and trying and finally walked in front of the mirror to see why she could not get it on. She asked me to help and I just got frustrated as we needed to go and the breakfast was not touched yet. I thought how hungry she would be if she would not eat it now. I told her to come and we needed to go. The backpack was packed, the homework was done, the breakfast was not eaten, the car had no flat tire and we needed to leave as she was still trying to get the necklace around her neck. I encouraged her to eat her yogurt with raspberries. What a luxury and how spoiled we all are and do we realize most people live in a food desert even in California around the Pacific-Crest -Trail !

We stopped by the kitchen table where one of our guests, a Pacific-Trail-Through-Hiker had laid out his map for DylanGrace to see that he, in fact, had walked 2648 miles from the Southern Terminus at Campo to the Northern Terminus at the US Canadian border  near Manning Park, Canada over the last six months since April 27 and he just arrived back on Oct 20th. I asked him about his biggest challenges. 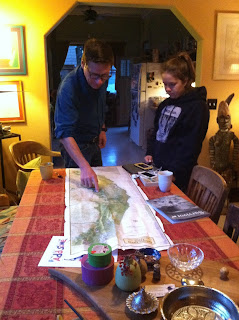 Dylan still needed to fasten her necklace around her neck. I said it would not work as the clasp was broken and she denied it and the guest told us about the preciousness of water and the Trail Angels. I wanted to find out about the Trail Angels...I wanted to BECOME a Trail Angel, now in this moment. I did not want to have my daughter tell me one more time about a necklace she needed to close and could not get closed because yesterday she cut something off it. I told her that it broke and she denied that and said she cut something off it before and it still closed but now it did not close and I wanted to talk more about the Pacific Crest Trail.  Does my daughter ever realize how fortunate she is to have the opportunity to talk to a Pacific-Crest-Trail-Through-Hiker for breakfast? She did not even take the opportunity. He started his hike at the Mexican border and stuck his hand through the fence where there were two holes and he photographed it.

We finally sat in the car and Dylan wanted me to call her school, to let them know that we would be late because of the necklace that would not close. We were leaving at 7:33 AM and we had never left that late before. The necklace was still not around her neck and I had visions of tearing it from her and throwing the whole darn thing out the window.  I said just because it worked yesterday it still might not work today and if she liked I could bring it to a jeweler and have it fixed. But, no, she needed it on her neck NOW, not later. NOW!  I stayed calm thinking of turning the situation into a Dharma moment and manifesting the Dharma into my Daughter and I suggested that if one tries one version and it does not work one has to try to find another solution and try it from a different angle. The same way of trying will only give you the same outcome so I suggested she carry the necklace in her pocket. That idea did not work, so suggested why not try to make a knot, but no, no knot was desired.  Why could she not wrap some clear tape around the two ends of the necklace? That idea resonated with her and she said: "Can you help me?" We arrived at school, the breakfast not eaten,  but miraculously there was clear tape on my dashboard. WHY I will never know!  I wrapped one piece around one end of the necklace at 8:03 AM and I wrapped another piece around the other end and she hid the tape behind her nape under her long, blond, very cared-for hair.   I pleaded for her to take two bites of her breakfast and she did and she left and closed the door and hiked up the hill to her German Class as I hung my head into the steering wheel and cried, radiant light all around me.
Posted by Martina Konietzny M.F.A. at 2:11 PM